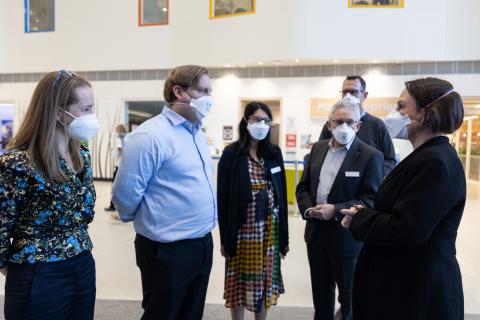 For thousands of Australians, this meant painful and invasive biopsies, and trial-and-error with various medications.

Evidence for Medicare funding came from a Melbourne Genomics study involving over 200 patients across four hospitals. Almost half of those patients received a genetic diagnosis through a genomic test, and more than half of those diagnosed had their care changed as a result.

“If you have genetic kidney disease, identifying a precise genetic cause is a game changer,” says Dr Kushani Jayasinghe, a nephrologist at Monash Health and one of the leads on the study.

“It will allow quicker access to more precise treatment and avoid more invasive tests like biopsies. It will also give you a better understanding of your own condition, and allow you to make informed choices about your future and your family.”

Jaala Pulford, Minister for Innovation, Medical Research and the Digital Economy, met Dr Jayasinghe at Monash Health to discuss the implications of the study.

“Victoria is leading breakthroughs in genomic medicine that are changing lives of people desperately looking for answers and better treatment,” said Minister Pulford.

Scott was 13 when he first developed kidney stones. They recurred every two years until his early 30s, when they doubled in size and number.

After undergoing laser surgery to remove the stones, Scott was informed that his kidney function had dropped to 30% and that he had Coeliac disease. Not knowing the reason why, he often ran through worst-case scenarios in his head.

Last year, a genomic test finally pinpointed the cause of Scott’s illness: a rare genetic disorder known as primary hyperoxaluria.

The diagnosis provided Scott with both relief and a way forward. While the long-term solution is a combined kidney and liver transplant, Scott’s doctors have been able to provide treatment to slow the progression of disease.

How can a support group help you?

What I wish I'd known as a new genetic counsellor

Pathways to a genetic diagnosis